To start things off, I figure that a very basic general overview would be appropriate for this new endeavor. 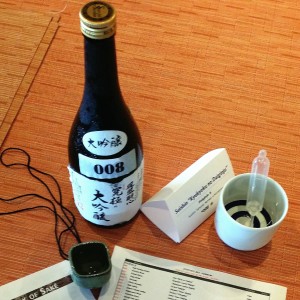 What we here in America know as “sake” is a Japanese wine brewed from water, rice, yeast and a special kind of koji mold. In Japan, that same drink is referred to as “nihonshu” (日本酒) because for the Japanese, “sake” (酒) refers generically to any alcoholic beverage. Be sure to keep this in mind if you ever find yourself in the land of the rising sun. Thankfully here in the states we can just go ahead and simply call it sake.

While we’re on the topic of what things are called, it’s a great time to go over some basic sake terminology.

Koji (麹) – A special rice mold used in the fermentation process. Yes, mold. But it just wouldn’t be sake without it!

Nama-zake (生酒) – Unpasteurized sake. Sake, like many other beverages is usually pasteurized twice before leaving the brewery. This helps to extend the shelf-life of the product. Nama-zake skip the pasteurizing process, so they must be kept chilled from brewery to customer and all points in between in order to keep them as fresh as possible before you drink it.

Nigori (濁り) – Coarsely filtered sake. These sake are usually cloudy with rice particles, and on the sweeter side because of that.

Polishing – This refers to the amount of the outer body of the raw rice kernel that is ground, or polished off before the brewing process. Most of the sake we drink today is polished to about 50% – 70% of the original rice kernel. This means that 30% – 50% of the rice is polished away. Your standard white rice for eating is usually polished to about 90% from the unpolished brown rice.

Junmai (純米) – “Pure rice” meaning that no additives like sugar or alcohol are added to the sake; Sake using rice polished to about 61% – 70%. Junmai sake are usually more bold, robust and flavorful than the other types of sake usually are usually more intense and slightly acidic in flavor. Junmai can usually be served at any temperature from warmed to room temperature, and even chilled as well.

A bottle of junmai, and a great view. What more could you ask for?

Honjozo (本醸造) – Like Junmai, Honjozo uses rice that is polished to about 61% – 70%, but instead of being a “pure rice” sake, there is a small amount of distilled brewers alcohol added in order to help smooth out the flavor and aroma. Like Junmai, you can enjoy your Honjozo at any temperature.

Ginjo (吟醸) – Premium sake that uses rice that has been polished to about 51% – 60%. There is also additional sugar and/or distilled brewers alcohol added to the sake. The flavors are usually lighter than Junmai, and have a slight fruity flavor and a fragrant aroma. More often than not, you’ll want to drink your Ginjo chilled.

Junmai Ginjo – The same as the above mentioned Ginjo, but the Junmai designation indicates that there are no additives.

Daiginjo (大吟醸) – Super Premium sake that uses rice polished to about 50% or less. This category of super premium sake only came into existence in relatively recent decades after brewers had advanced their techniques and art to reach this high level. Daiginjo are usually very light and complex in flavor and aroma, and are almost always served chilled.

Junmai Daiginjo – The same as the above mentioned Daiginjo, but the Junmai designation indicates that there are no additives. 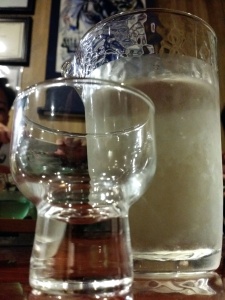 A more modern take on an ochoko and tokkuri.

There are many factors and variables that go into making good sake. Sure there are only a few ingredients, but things like the quality of water, or the soil in the region the rice is grown in, and a brewers techniques have tremendous affects on the quality and flavor of the brew. You may start to notice that you favor sake from specific breweries, or even certain regions of Japan.

Something to keep in mind: Just because Daiginjo are considered super premium and highest quality doesn’t necessarily mean they’re better. Sure they’re generally more expensive the more premium you go, but it’s really all about how it tastes to you, and what your preferences are. Don’t just assume that because a sake is Daiginjo that it’s automatically better than a Ginjo of Junmai. Get out there, and taste as many sake as you can, and find out which you prefer. 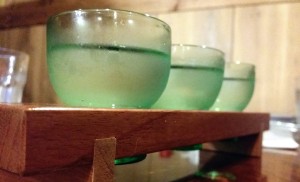 Many Japanese restaurants serve sake samplers as an option.

There is a whole wide world of sake out there waiting for you to explore, so get out there and get started! Kampai!