Last night as the sun set in Honolulu it began. Dozens of Honolulu sake lovers gathered at the Harbor View Center for the Joy of Sake 2015 Kickoff celebration. 60 of some of the finest bottles of sake were spread around the room, grouped by which Japanese prefecture they were from. People traveled the room, exploring Japan through the various sake on hand that evening.

A cup for each participant to use for the night

During the introduction for the evening, we were told that the boat from Japan has arrived in Honolulu. And on this boat are the Japanese sake which will be competing in the U.S. National Sake Appraisal, and served up at the Joy of Sake on July 31st. All of these Japanese sake along with a few selections from the U.S. total 391 different sake. This is the most sake that has so far been entered in any U.S. National Sake Appraisal, and Joy of Sake. Although there will be so many sake, it will be nearly humanly impossible to try them all. A good 40-50 is still considered a worthy effort. 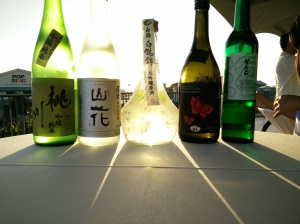 But a small sampling of some superb gold medal winners from the 2014 U.S. National Sake Appraisal.

We were also informed that along with 391 sake, there will be over 21 restaurants on hand serving up sake-friendly food. Some returning favorites include The Pig & The Lady, MW Restaurant, BLT Steak, Halekulani, Buho Cocina y Cantina, Kaiwa, Banzai Sushi Bar, and Migrant Maui. Some new local restaurants making their Joy of Sake debut this year inlcude Lee Anne Wong’s upcoming Hale Ohuna which is a noodle and sake bar soon to be opening its doors in Kaimuki, Chris Kajioka, the former Vintage Cave chef who will also soon be opening a new restaurant in Kaimuki, Ed Kenney’s brand new Kaimuki eatery Mud Hen Water, Mark “Gooch” Noguchi’s Mission Social Hall and Cafe located in the Mission Houses Museum in Honolulu, and Lance Kosaka’s soon to be opening SKY Waikiki. The food alone is enough to make any foodie drool.

There are so many sake and restaurants lined up for this years event that the Joy of Sake will not only be in the large convention room atop the Hawaii Convention Center, but out on the open air lanai and rooftop area as well. Last year was the first debut of the outdoor Izakaya Alley, and this year the Izakaya Alley will return, and be even bigger than last year!

Get your tickets here: joyofsakehonolulu.eventbrite.com